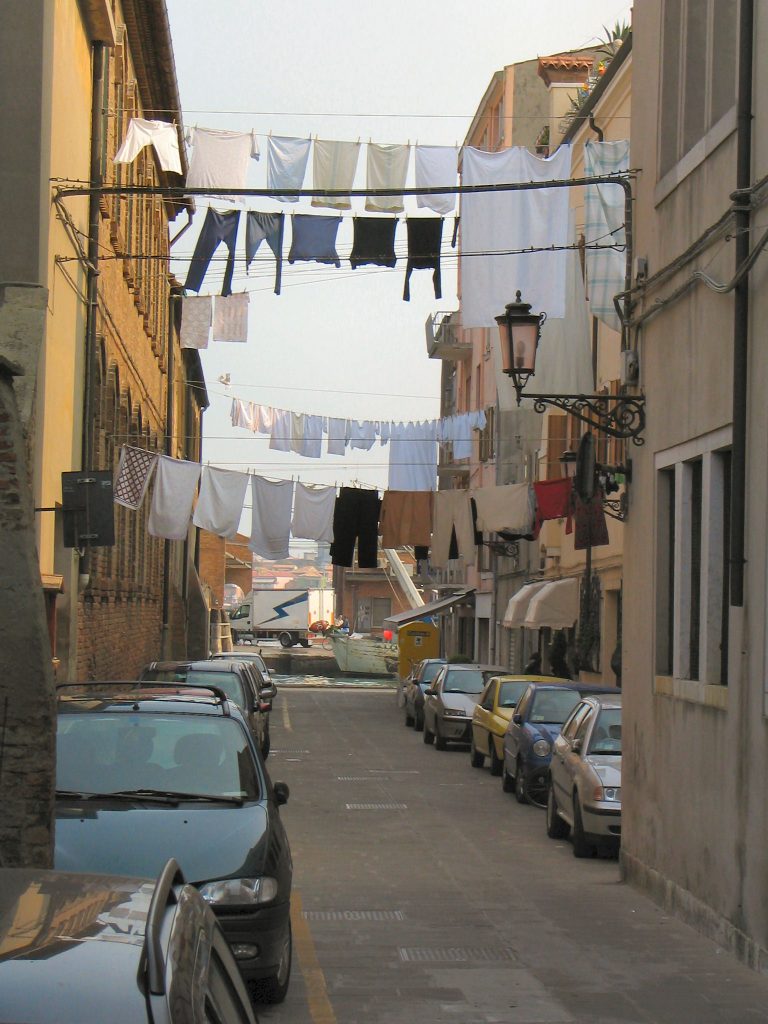 Even though dryers are becoming popular, the majority of Italians still dry their clothes by hanging them on a rack inside their homes or on a rope outside their windows.

{This is an excerpt from chapter 15 “Miscellaneous” of the eBook “Italy from the Inside. A native Italian reveals the secrets of traveling in Italy”. To buy the eBook click here}

One day I found an unexpected parcel at my door step. Curious, I opened it thinking that maybe it was something I ordered and then forgot about (which sometimes happens to me). What I actually found was an interesting illustration book and a notecard box, kindly gifted to me by the Princeton Architectural Press. The book, Grafica della Strada: The Signs of Italy by Louise Fili is a compilation of restaurant, shop, hotel, street, and advertising signs that the author has collected over the past 30 years during her trips to Italy. The images have been divided in chapters that reflects the typographic style of the signs: classical, traditional, eclectic, futurist, fascist, and so on.

These are some of my favorites: These are the four marble panels of the Farmacia di San Marco in Florence. Although the pharmacy has been closed since the end of World War I, its façade still displays a list of elixirs and remedies that used to be sold during its golden years (how cool is this?).

In the chapter about traditional signs there’s this photo that I really like and that, if you pay attention, you can still see everywhere in Italy outside the alimentari stores (family ran grocery stores): It is a list of the most important items for sale in the store. I like this sign because it shows a beautiful light effect, and most importantly the dedication of Mrs. Fili who waited for the sun to settle down and the illumination to turn on in order to catch this image. Color, color, color… this sign is simple and yet sophisticated. I’ve selected this photo for the Sermoneta sign on the bottom of the page. I find its characters very elegant and unique, besides the fact that the actual town of Sermoneta is one of my favorite Medieval villages in Italy. I couldn’t stop smiling after seeing this image. I do remember, when I was a child, many bars using this kind of beaded curtains. You don’t see many nowadays, and if you do, they are usually found in smaller cities and towns. Mosaic signs are an artistic expression very common in the Italian città d’arte, some are made to lead tourists to a restaurant, as shown above. I find the image above particularly interesting, first for its message (Duce= Mussolini), second because it hasn’t been removed after Mussolini’s fall. To me, it’s a piece of history well preserved (you can find it in the Foro Italico in Rome).

Louise Fili, a graphic designer with a love for all things Italian, is also the author of Quattro Parole Italiane Notecards (available on Amazon), a beautiful collection of notecards with four different Italian words printed on the front: This is such a clever idea as well as a beautiful gift to give to anyone who loves Italy.

I think that Grafica della Strada: the Signs of Italy by Louise Fili (available also in Kindle format) is a very unique approach to an aspect of Italy that often times is forgotten or simply goes unnoticed, but that nevertheless is a part of its artistic heritage. We are happy to announce the release of our new Kindle eBook titled “Tips for Transportation: All You Need to Know to Get Around in Italy.”

Download this eBook on your iPhone, iPad or Kindle device and take it with you in your next trip to Italy. It contains the very latest information on how public transportation works in Italy, all researched, collected and documented by Francesca during her extended stay in Italy. Topic covered include:

Priced at an affordable $1.99, this eBook features more than 110+ Kindle pages, 50+ original photos and a glossary of 100+ useful Italian words. We welcome your comments as well as your Amazon reviews!